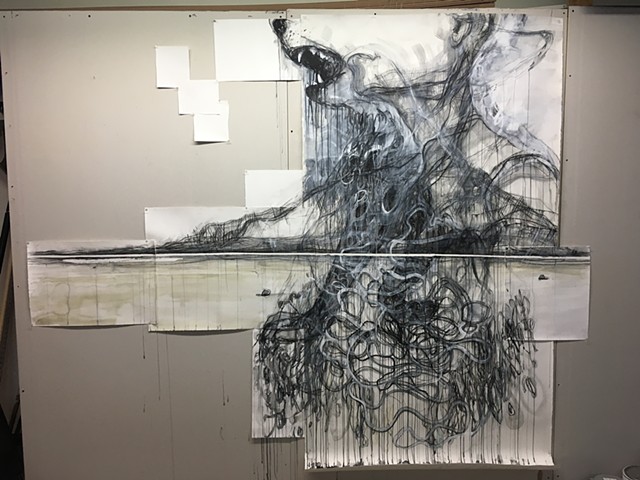 Where-wolf OR-28 is part of a series called Where-wolves that was originally inspired by the story of OR-7 the grey wolf that traveled across the state of Oregon and into California in search of a mate, and explores the concepts of isolation, loneliness, exploration and conservation and preservation. The series has expanded to include a pack of epitaphs for Oregon wolves we have lost to poaching and other suspicious but unknown causes. Where-wolf OR-28 was begun at a Playa, Summer Lake artist residency August 2017, the collared female was found dead on Oct. 6, 2016, in the Fremont-Winema National Forest near Summer Lake, Oregon. Cause of death not released.

From the Center for Biological Diversity in 2016: “The Center for Biological Diversity added $10,000 on Friday to the reward for information leading to the arrest and conviction of those responsible for shooting and killing an endangered wolf earlier this month in south-central Oregon. The wolf—a female known as OR-28, who recently had a pup—was found dead Oct. 6. "The illegal killing of wolf OR-28 is heartbreaking. She was a pioneering animal, one of the first wolves to make the journey from northeastern to western Oregon," said Amaroq Weiss, the center's West Coast wolf organizer. "OR-28 was also a first-time mother, who leaves behind her mate and single pup to fend for themselves. This was a cowardly crime. I hope the perpetrator is caught quickly." Because she lived in the western two-thirds of Oregon, OR-28 was protected under the federal Endangered Species Act. Poaching a protected species is punishable by a heavy fine and jail time. In 2015 the Oregon Department of Fish and Wildlife reported six wolf deaths due to illegal shootings, ingesting poison or from suspicious but unknown causes. This is the highest number of illegal and suspicious wolf mortalities recorded in Oregon in a single year. Only one of the 2015 wolf deaths resulted in a conviction.”