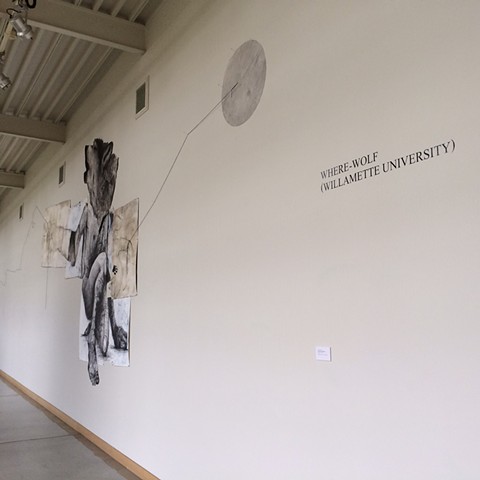 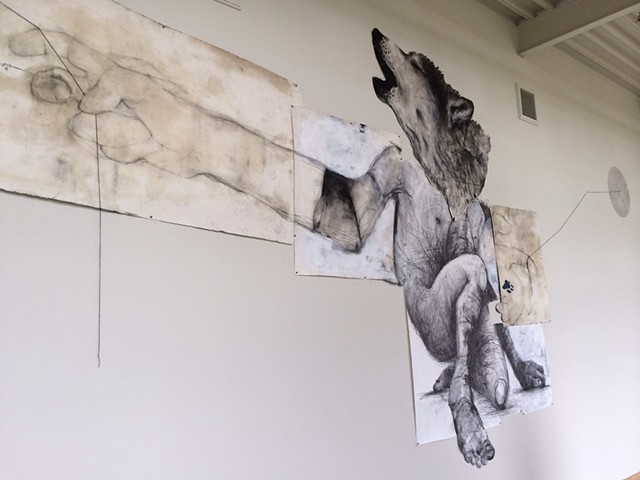 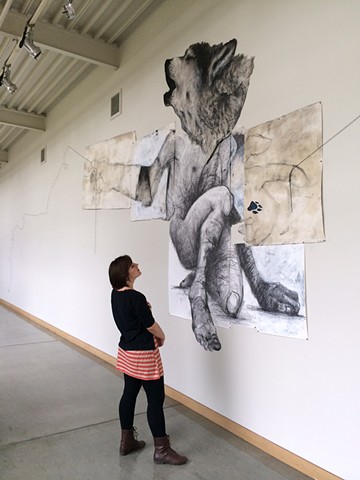 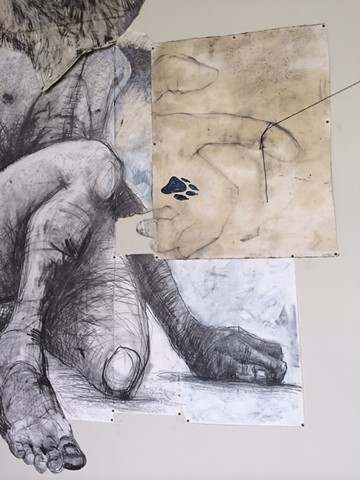 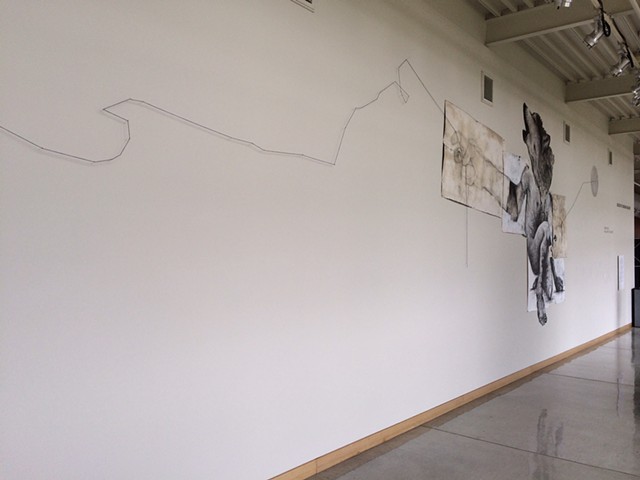 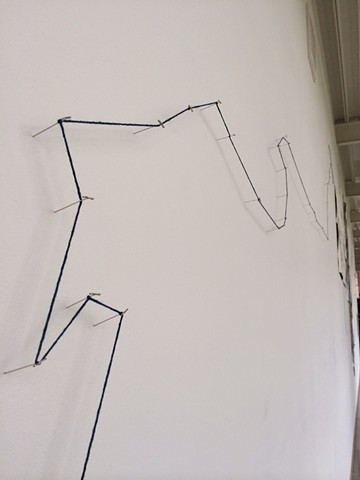 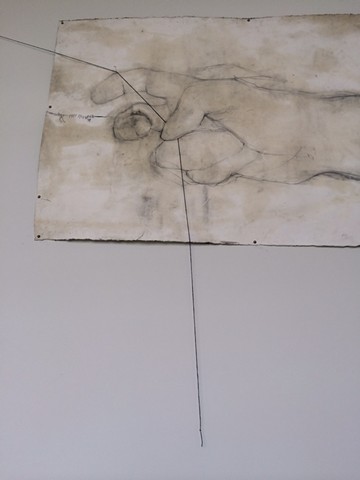 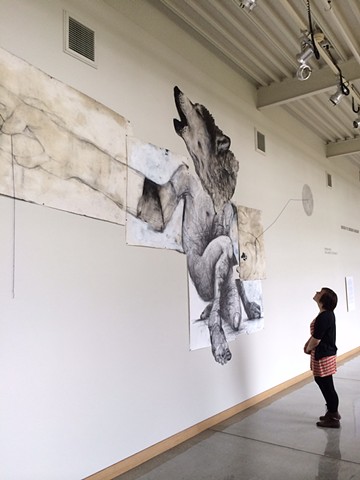 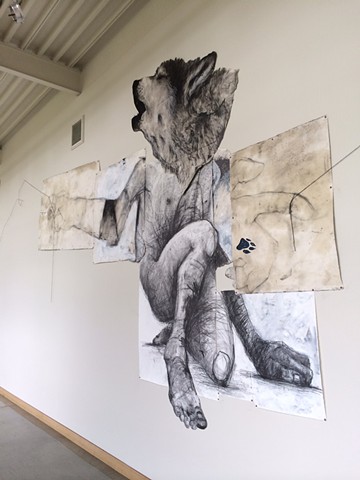 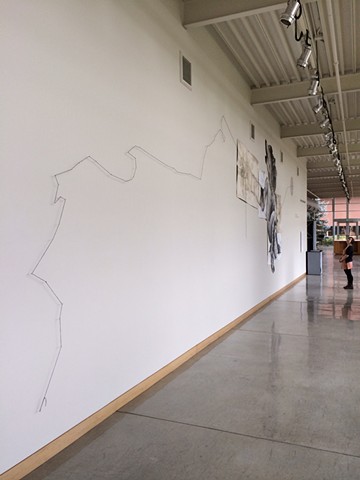 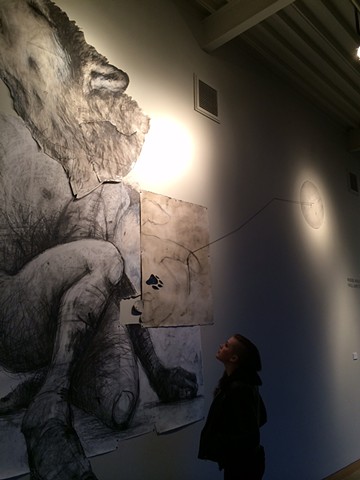 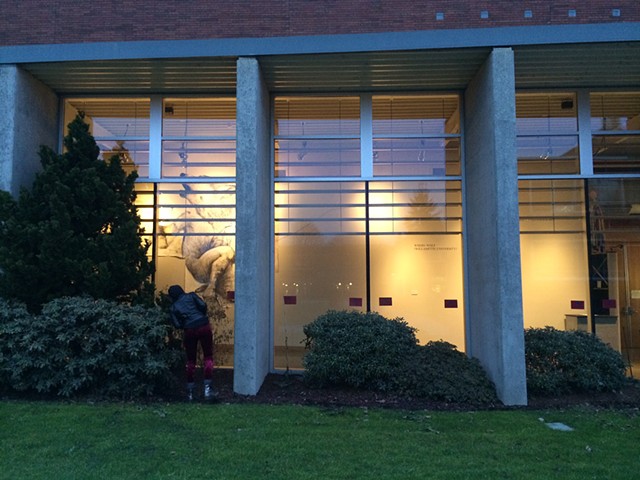 Where-Wolf (Willamette University), a mixed-media installation by Oregon artist Andrew Myers, explores the concepts of “place” and “home” metaphorically through the story of OR-7, a male gray wolf that abandoned the Wallowa County Imnaha pack in the summer of 2011. OR-7 subsequently traveled alone from northeastern to southwestern Oregon and northern California in an unsuccessful search for a mate with whom to establish a new pack. He became world famous when biologists tracked his extensive and solitary journey by means of a GPS/radio-telemetry collar. This technology allowed scientists to map his progress from Wallowa County to Crater Lake, and from there to California's Siskiyou, Lassen, Shasta, Modoc and Tehama counties. OR-7 spent much of last summer hunting deer at high elevation in the wilderness south of Mount Lassen, and returned to southern Oregon in March of 2013. He is the first wolf to be sighted west of the Cascades in more than eighty years.

Myers explains that OR-7’s journey mirrors his own life experience in several ways, “This story of futility and hope was very interesting to me, and being from Northeastern Oregon myself and now in Western Oregon, I felt a lot of connections. Still being single at my age with most of my friends married and having families made me think about OR-7's story even more and led me to explore ideas of ‘home’ and ‘place’ and what they mean.” As the son of a wildlife biologist and someone who is intrigued by the concepts of isolation, exploration, and loneliness, it seems quite natural that Myers would recognize the parallels between OR-7’s journey and his own experience. The title of the installation is also a play on the word “werewolf.” As such it refers to the tension between the instinctual and the rational, and alludes to some of the mythical ways in which one could become transformed into a werewolf (by drinking water from a wolf’s footprint or by sleeping outdoors with the light of the full moon on your face).

The installation includes a large scale half-human, half-wolf figure made from a patchwork of collaged drawings. The human hands of this hybrid figure hold the ends of two strands of string: one connecting it to the moon, and the other to the diagonal, zig-zag path of OR-7’s journey across an implied map of Oregon. The use of string as a device to trace a path reminds us of Theseus’ entry into the minotaur’s labyrinth (a myth that similarly explores the conflict between the rational and the instinctual, and also involves a therianthropic figure with a human body and the head of an animal). It is as if Myers wants to remind us that his work combines the approaches of both science and myth in order to represent the complicated and sometimes contradictory reality of human experience.

Myers draws in a very expressive and gestural way. His drawings, assembled as they are from modular, collaged elements, feel more constructed than drawn, and this gives them a remarkable physicality. The drawings appear to evolve naturally, even organically. Myers embraces chance and accidental mark-making (look for the canine footprints on the drawings), and maximizes the visual effect of erasure and overlapping. In its tactility, his handling of charcoal and other media brings to mind the work of his influences, which include William Kentridge, Rick Bartow, Egon Schiele and Susan Rothenberg. Myers combines well-observed and carefully-rendered specificity with robust and expressive mark-making to produce drawings that are visually striking and sensitive at the same time.